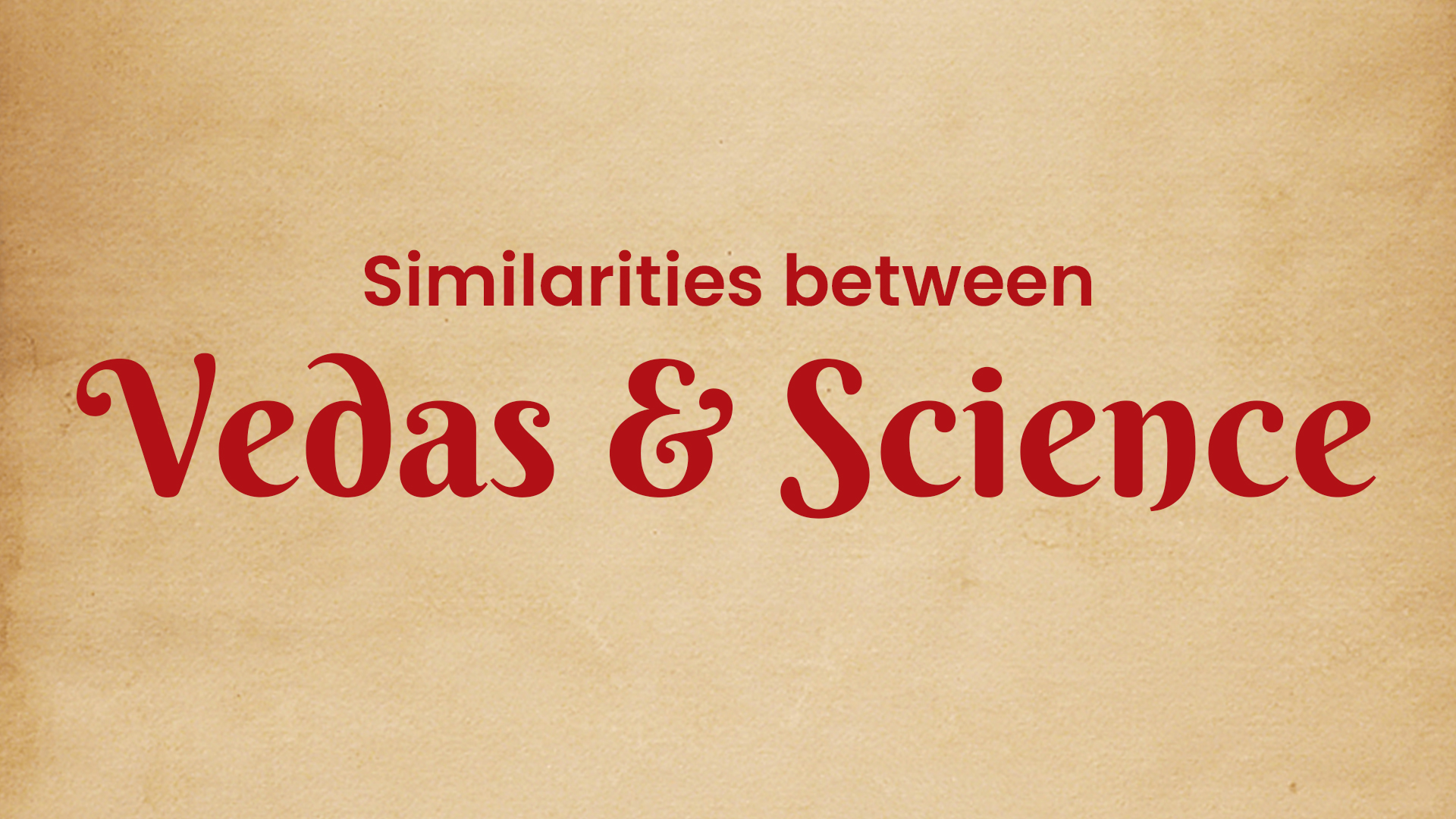 The Vedas are the religiously sacred texts that show the path of life and define the term ‘knowledge’ or ‘wisdom.’ Meanwhile, Science also depicts the pursuance of knowledge and its application in the physical world differently. Though the approach and way of application are different in both terms, there is still some similarity between the two. Let us understand in detail the similarities between Vedas and Science.

We all know that there are two ways to unveil or get knowledge about the Universe’s secrets which we have got. One way is Science, and the other one is Religion. Both of the ways are very different if we look at them from the surface. Science is something that we can see, and we can know the logic behind it. Science works on the grounds of reason and thus establishes principles based on that. In contrast, Religion first gives directions, and then it’s on us to think about that principle, whether it applies to our life or not.

In his remarkable book, famous author and writer Rodney Collin has described this entire thing in detail: ‘The theory of celestial influence.’ He has stated that :

“Man has two ways of studying the Universe. The first is by induction: he examines phenomenons, classifies them, and attempts to infer laws and principles from them. This is the method generally used by Science. The second is deduction: having perceived or had revealed or discovered certain general laws or principles, he attempts to deduce the application of these laws in various specialized studies and life. This is the method generally used by Religion. The first method begins with ‘Facts’ and attempts to reach ‘Laws.’ The second method begins with ‘Laws’ and attempts to reach ‘Facts.'”

Both the ways, Science and Religion, seem entirely different from the outside. But as we study both ways in deep, we know that both methods are very similar to each other. Not only this, as soon as both ways reach a conclusion, their language, results, and even their form of expression, begin to get the same.

A well-known scientist and an author of a famous book: ‘The Tao of physics,‘ Dr. Fritjof Capra has said pleasantly that :

“The modern Physics goes far beyond technology, the way of physics can be a path with a heart, a way to spiritual knowledge and self-realization.”

American Scientist Lawrence LeShan had done a grand experiment in the year 1970. What he did was he took 30 sentences from the Religion or spiritual world. And another 30 sentences from modern physics or Science. After that, he removed all the keywords from all the sentences. He removed Keywords like God and Brahma, Ishwar, Parmatma, etc., from spiritual sentences and also removed keywords like electrons, protons, energy, and others from the sentences of Science. After that, without changing the original language, he replaces all the keywords with technical terminology. Then he sent all these 60 sentences to the scholars of that time. And he asked the scholars to identify keywords from religion-related sentences and keywords from science-based sentences. You will be amazed to know that none of the scholars could find out which keyword was from Religion and from Science. These results prove that Religion and Science have many similarities in terms of ways of expression.

And an exciting thing to know is that the sentences which were used in the experiment by Dr. Lawrence mainly were from our Vedas. Even many scholars believe that Science or the entire evolution of Science originated from our Ancient Vedic tradition. And the text from ancient Vedas is full of knowledge. It is said that ancient Vedas are the oldest text in the world. The entire technology available today is somewhere is connected to our Vedas.

An American professor, Jabez T Sunderland, lived in India for many years. And based on his experience, he wrote a book called: ‘India in bondage.’ In this book, he has written that all kinds of Science were originated from India. And not only Science but all kinds of art, literature, politics, and even economics originated through Indian ideology. In his book, he has mentioned that :

“India created the beginnings of all sciences, and she carried some of them to a remarkable degree of the department, thereby leading the World.”

Many of the examples show that Science interprets the same language as Vedas. And also, the forms of expression are similar in Science and Vedas. Let’s have a look at a few examples :

Here, firstly we will see the statement given by Sir Arthur Eddington. He did a lot of researches on the galaxy and concluded that: all the stars, all the planets, Sun, Moon, Sky, etc., are created from the energy of the mind. He has stated that :

“The stuff of the universe is the Mind stuff.”

And the same kind of statement is given in our Upanishad Tejobindu. The verse is written in Upanishad is :

There is another famous statement given by a Physicist and a well-known author, Dr. David Bohm. The statement is :

“A mind is a subtle form of matter, or matter is a grosser form of mind.”

The same kind of verse is given in Satpath Brahman. The Verse given is:

And lastly, let’s see a statement given by Nick Herbert, the famous author of ‘Quantum Reality. He has issued a statement that shows the similarities between Science and Vedas. The statement which he stated is :

“Religions assure us that we are all brothers and sisters, children of the same deity. Biologists say that we are all entwined with life forms on this planet; our fortunes rise and fall with theirs. Now physicists have discovered that very atoms of our bodies are woven out of common superluminal fabric.”

And the similar type of principle is mentioned in ‘Shwetashavar Upnishad’ in this way :

The statement depicts that God-incidence everywhere. And there is something bigger than everything, which is present in every living creature in the form of God.

And thus, it’s proven that both of the different surfacing terms depict similar ideologies and expressions. The way of our thinking and the way of expressing is the same in both of the doctrines. By these above-given examples, you also might have got the idea that there are many similarities between Vedas and Science. And so, the belief that Science doesn’t exist in Vedas turns out to be completely groundless.