December 18, 2021 - Secrets and Significance of Festivals 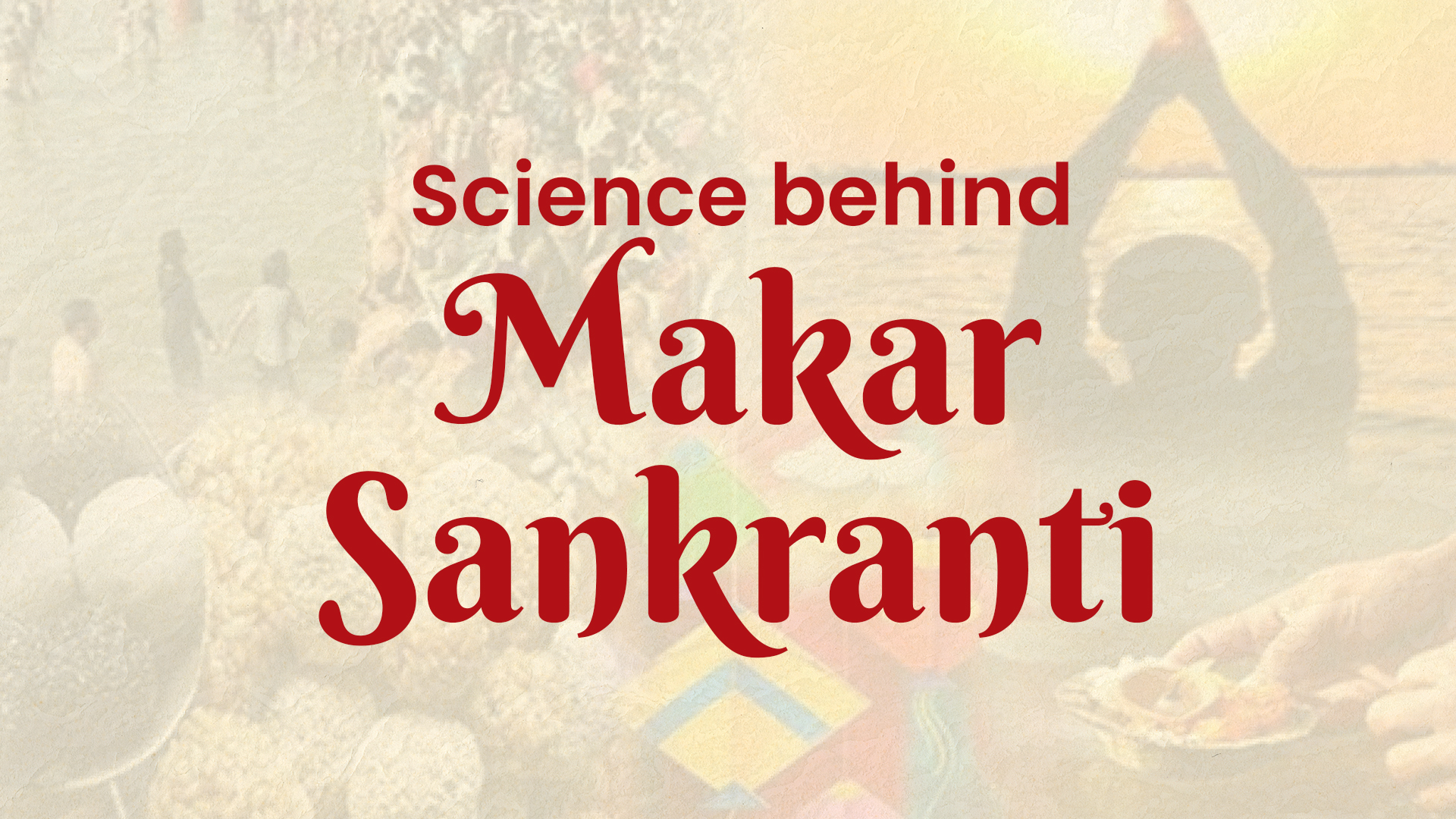 We all know that in Indian Vedic Tradition, there lies only one theory behind all the scriptures and that is :

“Whatever is there in the galaxy is present within us.”

And this simply means that there must be definitely some event going on in the cosmos on this day due to which this day holds great importance. On this day only, the Sun who lights up the entire universe goes to the Zodiac sign Capricorn of his son Saturn (Shani) or we can say that the Sun goes to the house of Saturn forgetting all their disputes and struggles. And that’s why Makar Sankranti holds such great importance. And for this, an amazing story has been mentioned in Kashi Khand of ‘Skand Puran’.

In the mentioned story, Surya Narayan got married to Daksha Kanya Sangna. Now, due to the high brightness of Surya Narayan, Sangna was not able to even see him and she had to keep her eyes covered in front of Surya Narayan. Anyhow the time was getting passed and after some time, Surya Narayan got blessed with three children named Yamaraja, Yamuna, and Vaivatswat from his wife Sangna. Now, as time passed by, Sangna face difficulties staying with Surya Narayan, and thus she thought of doing penance and taking blessings from Lord Brahma Ji. But as she could not go anywhere leaving her family, she used a technique. She placed a woman who looked similar to her named Chaaya as a doppelganger in her place. No one came to know about this. And as Chaaya was the shadow of Sangna, she faced no difficulties going in front of Surya Narayan. After some time, Surya Narayan Ji again got blessed with three children named Shani, Manu, and Bhadra but this time from Chaaya. Now, when Shani was born, he was very dark in color and so the Surya Narayan got suspicious that Shani could not be his son. He suspected that the father of Shani might be someone else. And thus in his anger, he said many bad words for Shani. Hearing that, Shani, peek at the Sun. Now, we all know that Shani was born to give Karma and the Karma of Surya Narayan was bad. So when Shani peeks at Sun, the speed of the Sun’s chariot slowed down. After a lot of effort, the speed of Sun’s chariot gets increased and due to that Surya Narayan got very angry. And as the zodiac of Surya Narayan is Leo (Sinh), he due to his anger burnt down the house Aquarius – the home of Shani which lies at 180° from the house of Sun. Now, as Shani is the Lord of Karma and Surya Narayan did the bad Karma due to his anger, he got affected by leprosy and his body started becoming white. Within no time, Yamaraja came to know about the whole scenario. Yamaraja intervened and tried to explain everything to Surya Narayan. Not only that, but Yamaraja also cured the disease of his father. Even if we only see the ancient mantra of Shani, then also we will be able to understand this complete incident. The mantra of Shani is :

This story does not end here. After the intervention of Yamaraja, Surya Narayan realized his mistake and keeping his dignity aside, went to meet his son Shani (Saturn). When he reached the house of Shani i.e. Aquarius, saw the house entirely burned out. But as the Shani has two houses – Aquarius and Capricorn, he was living in his second house i.e. Capricorn. And until that time, he also understood about the whole incident and why his father was angry with him and all. So due to that, Shani also came in a kind of neutral position and welcomed and greeted his father – Surya Narayan. As he did not have anything to offer his father, he offered him Black Sesame. After eating Black Sesame, Surya Narayan got pleased and gave a boon to Shani that whenever he will come to Shani’s house, the house will become complete as it was earlier and will become wealthy and blessed and also will become a good source of positive energy for the entire world. Just because Shani got back his endeavor due to Black Sesame, we eat laddu of sesame every year on Makar Sankranti. And we also donate Sesame every year on this day. There is a verse given in ‘Brahma Vaivart Puran’ that says eating and donating Sesame on Makar Sankranti fulfills all the wishes. The Verse is:

Now if we understand the story carefully, then in this story the Sun is the king, and Saturn (Shani) comes into the people. So this story depicts that the king who represents the highest level of energy goes to the people. And this kind of event is called descending of energy in scriptures. This unique event takes place on the day of Makar Sankranti. On the day of Makar Sankranti, the highest level of energy that cannot be achieved on any ordinary day becomes available. And this highest level of energy that is present in the cosmos becomes available for everyone and everywhere on this auspicious day of Makar Sankranti. Now, to understand this available energy, we will have to understand the nakshatra of the Capricorn zodiac. We already know that the zodiac sign of Capricorn starts from the second phase of Uttarashada Nakshatra. Getting into details, it’s known that the lord of Uttarashada nakshatra is Sun and the deity of Uttarashada is ‘Vishwa Dev’. Vishwa Dev – the lord of the earth is not only one deity. There are in total ten deities who operate the entire world, run our lives, fulfill our wishes, and are responsible for all of our karma. It has been clearly said in ‘Vayu Puran’ that Dharma has ten sons with his wife named Vishwa. And those ten sons are called Vishwa Dev on whom our entire lives are dependent. A Shloka is given in Vayu Puran that states :

So, the necessary energy which is known as Vishwa Dev which is required to achieve success becomes available for all of us on the day of Makar Sankranti. We can get a clear idea about this by understanding the meaning of the name of each of these ten deities.

So, on the day of Makar Sankranti, the sun makes all of these ten energies available in the entire cosmos. This is the science behind Makar Sankranti and that’s why it holds great importance. Now, the main question arises that what karma should we do to utilize the energy of such an important day of Makar Sankranti. And for this, one Verse has been given in Nagar Khand of ‘Vayu Puran’ and in ‘Matsya Puran’.

“By taking bath, Donating, doing Yajna, doing Penance and Shraddh, one can achieve great results on the day of Makar Sankranti.”

Bathing means not to take bath anywhere but to take bath in any of the pilgrimage places or places which are known as Tirth where the vortex of energy is present. By taking bath at such places, we can get the energy that is available in the cosmos. To get the energy, it is advisable to do penance which means to either keep fast or recite mantras, or to do the constructive positive inhalation exercise such as meditation. It is also advisable to do Shraddh to achieve benefits. Shraddh means to do an activity for the salvation of our ancestors. And then, it is advisable to do Houm which means Yajna to please the deities. Deities mean certain positive energy zones. As soon as they get pleased, we can get happiness and glory from them. Lastly, it is advisable to do donations. When we talk about donation, many wrong perceptions lies in our minds about what to donate and whom to donate. It has been given in detail in our scriptures such as Matsya Puran and Vayu Puran regarding what to donate and whom to donate on this specific day of Makar Sankranti based on the zodiac signs.

Let’s see what to donate on this particular day of Makar Sankranti based on the zodiac sign in short:

Aries – The people of this zodiac sign should donate Jaggery, Peanuts, and Sesame.

Taurus – The people of this zodiac sign should donate White cloth, Curd, Rice, and Sesame.

Gemini – The people of this zodiac sign should donate Moong dal, Blankets, and Rice.

Cancer – The people of this zodiac sign should donate Rice, Silver, White Sesame, or Pearls.

Leo – The people of this zodiac sign should donate Copper, Wheat, or Sesame.

Virgo – The people of this zodiac sign should donate Green clothes, Blankets, or Khichdi.

Libra – The people of this zodiac sign should donate Sugar, white clothes, or Kheer.

Scorpio – The people of this zodiac sign should donate Red cloth, Moong dal, or Sesame.

Sagittarius – The people of this zodiac sign should donate Turmeric, Yellow cloth, or Gold.

Capricorn – The people of this zodiac sign should donate a Black blanket, Sesame, or any item made of black sesame.

Aquarius – The people of this zodiac sign should donate Kidney beans, Khichdi, or Sesame.

Pisces – The people of this zodiac sign should donate Silk cloth, Chickpea Lentils, or Sesame.