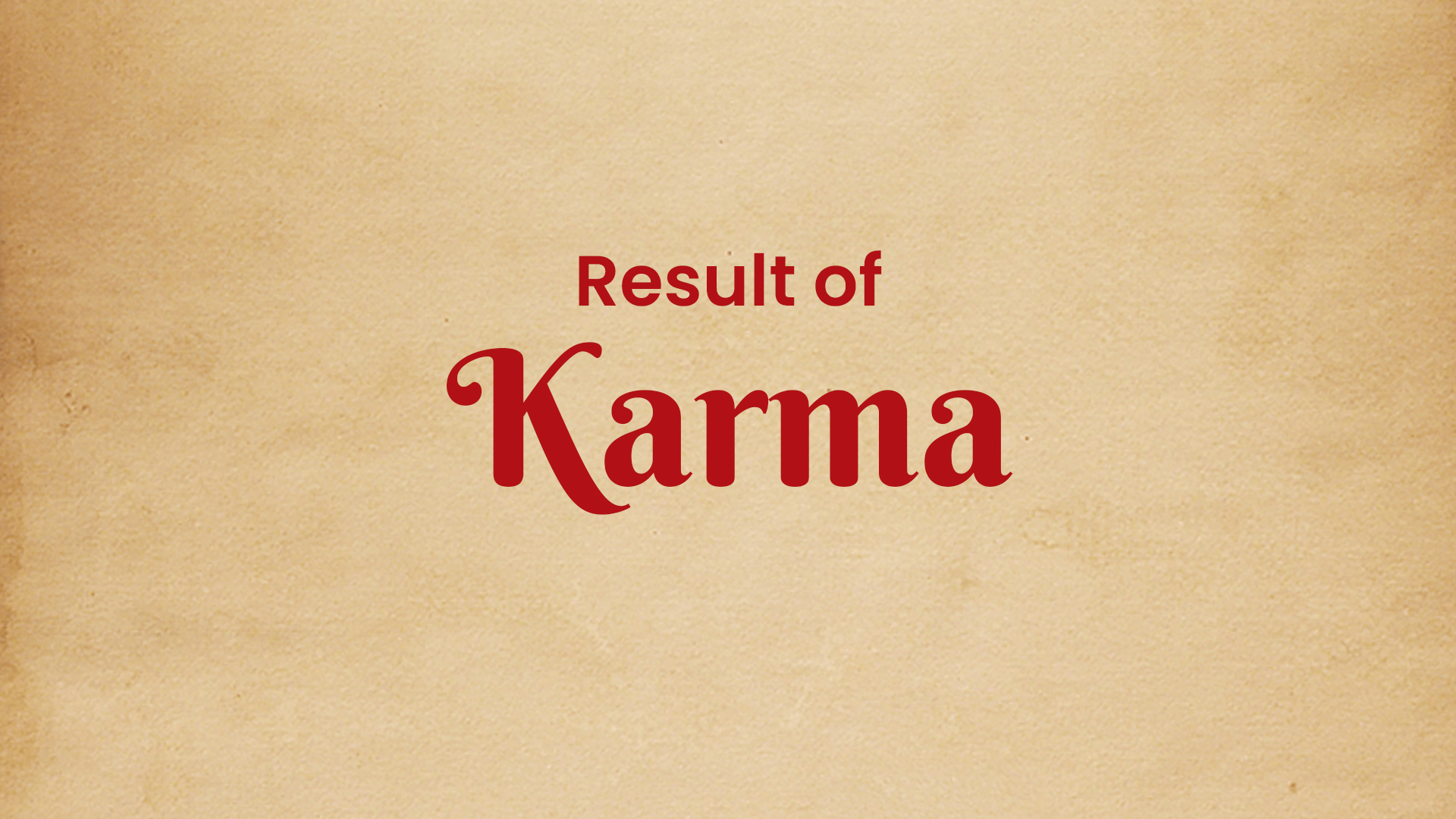 We all know that karma is defined by the summation of all our past life deeds or actions and our present life deeds. A great impact of karma can be seen in our future lives based on our past or present life actions. And these deeds or actions can be either good or bad which leads to either beneficial results or harmful results according to karma. Let us understand the whole topic of the results of karma in detail.

In Narada Purana, a question arises in the mind of Shaunak Rishi. He questioned that, “if a person commits both sin and virtue, then can sinful karma get washed away by doing virtuous karma, or will that person have to suffer the consequences or fruition of both karma?” In response to this, Maharshi Narad said that every auspicious or inauspicious action has to bear its results or sufferings accordingly. And he said that bad karma cannot be destroyed by good karma. To explain this, Maharshi Narad himself narrated a story from Mahabharata and Brahma Vaivartya Purana.

We all know that there are eight directions. And the deities who protect these directions are called ‘Vasu’. Once upon a time, all these eight Vasus felt like having a round of the earth. And so, all of those 8 Vasus came to earth along with their wives in order to roam around the earth. While roaming around, they reach the ashram of Maharshi Vashishth. They all get surprised looking at the arrangements and happenings of the ashram. And not only that, Vashishthji even had a special cow named Kamdhenu. There was a word or talk about the special cow that whosoever drinks its milk becomes immortal. And therefore, many of the humans, Gandharvas, and even gods had tried to steal that cow. Out of those eight Vasus, there was one Vasu named Prabhas. When the wife of this Vasu named Prabhas saw and heard about the talks of Kamdhenu cow, a feeling of greediness developed in her and she thought of stealing the cow. And with that thought, she went to Prabhas for asking him to steal the cow for her human friend. She tells Prabhas that they are Gods and are already immortal so if her friend will drink the milk of this special cow, then she will also become immortal like them. And thus, she can stay friends with her human friend forever. Hearing this, Prabhas laughed and looking towards her, he said that we cannot do this. And he also said that man gets immortality from his deeds and added that we cannot give someone else’s fruition to the other person and none of us should do karma like stealing. But the wife of Prabhas was adamant and therefore she convinced the wives of the other 7 Vasus. Prabhas in his love and infatuation for his wife finally agreed to steal the Kamdhenu cow. He then convinced the other 7 Vasus and kept a condition in front of his wife that they will steal the cow in Maharshi Vashishth’s absence to give her friend milk from the cow and will bring back the cow before Vashishtji comes back. His wife agreed to this condition.

When Prabhas was convincing the other seven Vasus, Vashishthji came back to the Ashram. And as we all know that Vashishthji was the guru of Lord Rama and was trikaldashi, so with his divine vision, he came to know about the events taking place in the Ashram and learns about the planning of Vasus. As soon as Vashishthji learns that they are deities and they have thought of stealing in their mind. He felt that even the thought of stealing in the mind of deities is a big sin. And therefore, Vashishthji thought of making an arrangement in order to give punishment of the sins done by the Vasus. Now, as Vasus were deities, they also learn about Vashishthji thoughts with their divine vision. As soon as they learn about what Vashishthji was going to do, they all realized their mistakes and started repenting. And they also washed the feet of Vashishthji with their tears and asked for forgiveness.

At that time, Vashishthji told Vasus, ‘being deities you should first awaken the divinity in you and added that even the thought of stealing should not come to your mind. But as that thought had come to your mind, you will have to bear the consequences of it. And the consequence is that you have to take birth on earth in the form of humans. You will have to become human from god. But as you have repented, 7 of you will attain Moksha right after taking birth from the lap of mother Ganga. But Prabhas Vasu will have to spend a long time on earth as he got influenced by his wife and planned of this sinful act.’ The Vasu Prabhas became Bhisma Pitamah in his human incarnation. And we all know about Bhisma Pitamah and the sufferings he endured in his life. Not only that, as Prabhas committed the sin due to his affection for his wife, Bhisma Pitamah remained celibate for his whole life. This is the type of arrangement of karma. And if we look at the actual story of Mahabharat, Ved Vyasji said that Bhisma Pitamah had not done any inauspicious or evil deeds. However, still, he was the one who suffered the most sorrow, pain, trouble, and even physical hardships. Let us see an important verse given after this story. The verse given is :

“The karma we do either good or bad will eventually give results even it takes 100 crores Kalp, i.e. 100 crore days or nights of Brahmaji. No matter how much time it takes or how many times the earth gets reincarnated, one will definitely get the results of his karma.”

Thus, it’s also been mentioned in the scriptures that good deeds cannot wash away evil deeds. And we will get results of both of our deeds. Therefore, we all should try to do more good deeds and try not to do any evil deeds.